Sound Stains Performative Version is a performative space in which the public is the creator. This space gives a series of panels to the public where they can express graphically themselves and a real-time audio processing system which is fed with the public improvisation into MIDI keyboards and open microphones. It is like a game in which we investigate, collectively,  the interaction of multiple creative stimuli of different senses.

The performative version of sound stains is designed for a multimedia performative space. This version was premiered in September 2015 at the II nomad roots encounter in el coco, Cáceres Spain.

Premier of the work performed by  nomad roots

Sound stains is integrated by four sound sources and four visual sources. The Visual sources consist of four aluminum panels where people attending the performance can create, paint, draw or express whatever they want. The four sound sources are formed, each one, by a digital repeated loop,  alternating each repetition with a silence of the same duration. There are also two open mics and two MIDI keyboards where people can improvise freely. The sound of the keyboards and mics will be processed by a real-time signal processing system that will transform the sound. All real-time electronics are carried out by a Max/Msp patch that can be seen in the following video, without public improvisation. 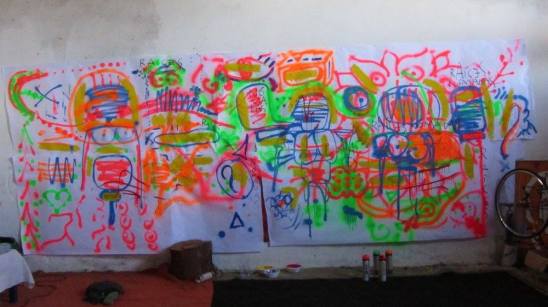 The relation between visual and acoustics events is not defined in advance. Instead of a closed relationship between the two kinds of stimuli, rather, Sound Stains aims to turn the space into a sort of testing place for exploring the interactive possibilities of these elements. It can be a virtual mixer in which visual stimuli determine what is heard or it may be a virtual canvas where people can paint freely about what the music suggests, or react to what has painted another person. The core of the project is to enable people to move freely around four sound sources and the four aluminum surfaces. It is not, therefore, a performative event in which people passively suffers what is shown, but it is a space in which the audience is an active part of creation.  Sound stains aims to promote an active attitude from the public. We want to create an open space where each one of us faces its creative needs. 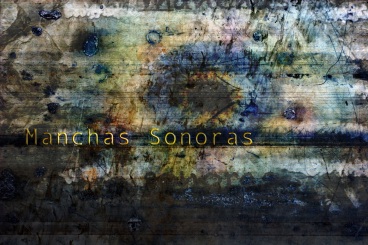 Music can determine how space is lived. Space can determine the way we listen. The role is in the audience. We only put a number of elements to let Thing happened.

Note distributed to the public before attending the performance.

Sound stains is a performative space that gives you the possibility of creating or simply being in it. If you choose to create, you have four aluminum panels at your disposal. You can express yourself creating what you want (painting, drawing, writing, graffiti, coloring, photographing, dancing, moving, …). You get  at your disposal two MIDI keyboards and two microphones in which you can interact  (sing, play, talk, shout, etc,..) The point is to look for your own way of being comfortable in the creative space we propose. 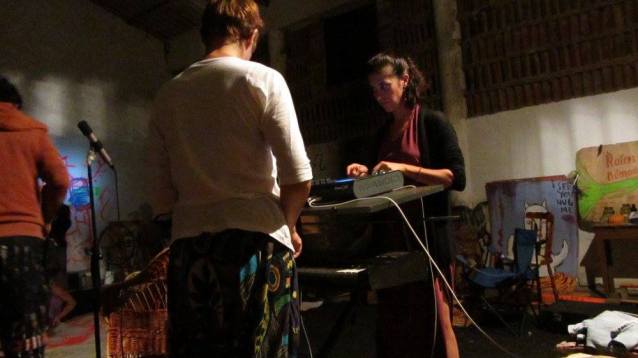 Also, you can move around looking for the sounds that you can enjoy and express yourself through the microphone or through MIDI keyboards. Whatever you do will be transformed and amplified by the real-time sound processing system.

In Sound stains, there is no stage nor center. The center is you and the accommodation to your feelings and the stimuli you perceive is the stage. The Sound Stains scenario is within you.

Simulation video of the Sound Stains Patch with distortion, please heard to it in a medium or low volume.

Translate to your language